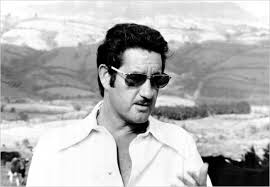 And then there was Bob Vesco

In 1963, when I was President of the Two-by Two Club of the United Church of Rowayton, CT the club secretary was Pat Vesco and, because she didn’t have a baby sitter for her four children, the committee met at Pat’s house. That is when I first met Bob Vesco.  He seemed a pleasant sort of chap, if seemingly thinking of other matters.  I next met bob when I found myself sitting next to him as we rode the New Haven Line to Grand Central Station.  This time, he was quite chatty, cross examining me about my job.  He said he was a salesman for extruded aluminum and I ater found that he worked for Olin Matheson in New York   He told me he was only making $12,500 a year and he could not live on that.  At the time, I was making $13,500 and that was the last time I made more than Vesco.

Before we knew him in Connecticut, Bob Vesco, the son of a Detroit auto-worker, married Patricia when he was 17 and still in high school.  He worked afternoons as a car mechanic and then got a job as draftsman for Reynolds Aluminum.  He then switched to sales, moved to Connecticut and took the job at Olin Matheson.

In 1964, Bob and family moved with very little notice to New Jersey where Bob started working in sales for a small machine shop. When he had difficulty getting his commissions paid, he accepted shares in the company and gradually with a loan, he became the sole owner of the business.  On a trip back to Rowayton for our club’s Christmas party, Bob was driving a Cadillac and Pat had a fur coat so we knew some changes had occurred.  The only comment Bob made was that the shop was doing “Government work”.  Little was heard about the Vesco’s until an article on the front page of the Wall Street Journal old us Bob had swindled $200 million from Barney Cornfeld, a financier who was under investigation by the SEC. Cornfeld’s company, Investors Overseas Services, IOS was in serious trouble and Vesco jumped in as a “white knight” to save the company without any SEC approval.  The company owned several manufacturing companies and an airline.  Instead of helping IOS recover, he got all the properties transferred into his name and set his family up in style in an 80 acre wooded estate in New jersey and when the SEC  came looking for him, he had fled to Nassau in the Bahamas.

From then, Vesco became very clever jumping from one Central American country to another. An article in People Magazine dated April 1974 shed a light on their life in the Bahamas after the family joined Bob in Paradise Island, Nassau.   It described Pat as a scared lady, worrying about the security guards and the walls all around the compound, floodlit night and day.  She says she worries about what will happen to them and to him.  Bob commutes in his private well equipped 707 plane between the Bahama residence and a similar high security home in Costa Rica.  In 1974 their three boys were 19, 17 and 10 and the daughter was 13.  They were living in luxury with a yacht, Patricia, three $100,000 powerboats, horses and passenger jet planes always available.  Vesco was wanted by the SEC for stealing $223 million and for making an illegal $200,000 contribution to the Nixon re-elect fund.  He had stolen from all kinds of investors including some royalty.  He would have been arrested as soon as he returned to the States. Vesco remained notorious, trying to buy an island from Antigua, having a law passed in Costa Rica protecting him from deportation.  His money bought favors all over Central America.  About 1982, he moved to Cuba and used his money to again get favors but he made a mistake in involving Fidel Castro’s cousin in an illegal cure-all medicine scam.  He was accused of “illegal and illicit economic activity” and was sentenced to 13 years in jail.  In Cuba, he appears to be alone, having lost wife and family somewhere.  He was reported marrying a Cuban lady at one time. One report had Pat and the family safe back in New Jersey but subjected to substantial fines.  It was reported that Vesco died in Cuba in 2007, but knowing Vesco, there remains a suspicion that he faked his death and is living well somewhere else.

One thought on “Character Number Eight”