After the trauma of our failed presentation to the Board of Standard Oil, life and work in the office of American Cryogenics seemed dull in comparison with our prior excitement at what we thought was a giant step into the future. There was however, some excitement.

Namuth and the NY Jets won Super Bowl III, Neil Armstrong and Buzz Aldrin landed on the moon on July 20 and Armstrong said the first word heard from the moon, “Houston.” Six hours later on the 21st,

he made the first step on the moon’s surface. We bought a new 1969 two door Oldsmobile Cutlass. Oh, and I almost forgot, I got fired from American Cryogenics in May.

It was announced that ACI was being acquired by my old company, Air Liquide. (Note. They dropped the L’ in the States.)  I was certain that could only be good news for me because I had worked for them for ten years and had contributed to the design of many of their plants as well as in the sales and start-up of a large number of their customer’s plants. I was well thought of when I left and the General Manager of L’Air Liquide, North America, Pierre Salbaing, called me when I resigned to ask me to reconsider.

None of this was known to the Standard Oil representative who was given the job of paring down the number and payroll of the employees to a level stipulated by Air Liquide. I was the second person to be fired. We were all given a month’s salary for each year of ACI service so I got four months. A few of us were invited to take other positions in Standard Oil or one of its subsidiaries, and I was offered a position in Esso Research in New Jersey. I did not even consider it because I would never want to live in the North again, least of all, in New Jersey.

As soon as I heard of the sale of ACI, it was confirmed in my mind that I had participated in the very Board Meeting at which the executives of Standard Oil, instead of approving our $100 million proposal, decided to divest themselves of American Cryogenics.

When L’Air Liquide of Paris first entered North America by building its gas separation plant manufacturing company in Montreal, Canada, they had an un-written agreement with their largest customer in the States, Air Reduction Company to not enter the actual industrial gas market except in Canada. In return, Airco would continue to buy their plants from Air Liquide.  Air Liquide’s  only involvement was with the joint development by Jacques Cousteau and L’Air Liquide’s Manager of Research, Emile Gagnan, of the Aqua-Lung valve and the consequent involvement in scuba equipment marketing and diving gases through U.S. Divers, an Air Liquide subsidiary. The acquisition of ACI clearly showed that there was a major strategy change. (The Airco agreement ended in the seventies when British Oxygen took over Airco.  Air Liquide followed the ACI acquisition by buying several cryogenic related companies and then took the ultimate step by acquiring Big Three Industries in August of 1986 for over one billion dollars, making them the major US supplier of industrial gases in the country.)

For the next six to eight weeks, a group of us victims of the firing met regularly on week days at the Bobby Jones

Memorial Golf Club which was public and in-expensive. We varied from 5 to 15 golfers once we all had our resumes up-dated. Occasionally, one or two would be missing when they went off for job interviews. Doris complained, saying that she married me for better or worse, but not for lunch, but apart from the strain of being un-employed, it was a pleasant, relaxing time.

After about two months, just as the pressure started rising, most of us had job possibilities. I was contacted by a young brokerage account executive, Harlan Allen who had just invested $25,000 in a Union Carbide Structural Foam Plastic Molding Process license. He was the second licensee of this newly developed process and wanted to form a company, raise money and build a plant to produce new and larger plastic products than were currently available. He was looking for someone to organize it and be the President. He was doubly attracted to me when he learned that I was a Chemical Engineer but also because he thought my Ph.D. would help him attract investors.

He had a following of investors who had made money taking Allen’s advice and it was surprisingly easy to get them to participate in his formation of a Limited Liability Company. He raised $ five million almost immediately and this allowed him to hire me and rent a temporary office. I first went to Union carbide and learned everything I could about the process and the changes they had designed to the equipment. The rigid foam plastic was totally new, even to long time plastics engineers. This gave me the advantage of being one of the first experts in a new process even though I had no prior plastic molding experience.

The molding of plastics and the increasing availability of new polymers had been going on for several years with extruders melting and injecting the hot melt under very high pressures into a steel mold which is clamped in a high-powered press. Products made this way were limited in size because of the pressure. This also produced, when cooled, a brittle and relatively thin product wall and often left residual stresses in the material. The Union Carbide low pressure process involves injecting nitrogen gas into the hot melted plastic in the extruder causing the molded product to have a sold skin with a porous interior and using about 20% less polymer. The nitrogen helps the polymer get into the mold and it does so at very low molding pressures. This produces a thicker, rigid product with no residual stresses or brittleness. It also allows the mold to be made from aluminum and the product to be much larger, without needing such a high powered press. Product designers immediately started discovering that they could make multiple small products or had the freedom to design much larger items, such as pallets, storage bins, decorative house shutters and many new computer and office machine covers or cabinets.

I bought office furniture and supplies from American Cryogenics as they gradually closed their office. I also hired a secretary and an engineer who, like me had been laid off. The engineer, Ernest Holdredge and I went to Sterling Extruders to learn about how they had modified their extruders specifically for nitrogen injection and to Williams White to understand the molding press and to learn about molds and mold makers. We later returned to those companies and placed an order for our first machine, a 150 ton unit.

Holdredge laid out the equipment to scale on a drawing and we decided we needed a 25,000 sq. ft. building. We located a site in a new small industry complex on the north side of Atlanta and planned a groundbreaking ceremony for January 19th, 1970. We 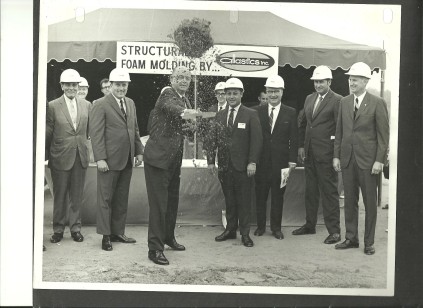 invited Lester Maddox, the Governor of Georgia to come and do the ground breaking. We had a tent with coffee and doughnuts and the new company logo that I had designed, prominently displayed. At that time Maddox had been having several controversies with the Atlanta press and when he got a load of dirt onto the structural foam shovel we had made for the occasion, he asked the Group of press photographers, “Are you boys ready?” A chorus of “Yes Governor” was met with the dirt being thrown over them. It was nevertheless an important day for the Allastics President, the Directors and a good crowd of its investors. The rapid growth and the future of our new company is another story for another day.