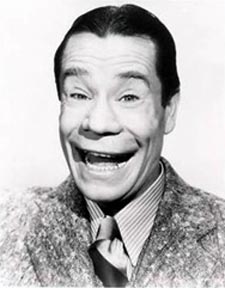 And then there was Joe E. Brown.

The stage-play, “Harvey” opened on Broadway in 1944 and the London version opened in 1949. I had served my two years in the army and was back at Imperial College, starting my third year of Chemical Engineering.  I was also in my third year of courting Doris Dewing,  a secretary at the BBC.  Our relationship was a little shaky because having met her in  1945, I had left her in 1946 and gone into the army so our relationship was mostly by letters.  I took her to the Prince of Wales Theatre to see “Harvey” the new play with some American chap called Joe E. Brown who was supposed to be funny.

“Harvey” is a play about an eccentric named Elmer P. Dowd. ( “Let me give you one of my cards”.)   He seemed quite normal except for the fact that he had this six foot white rabbit as a friend and companion that only he could see.  His sister, Veta, embarrassed by this and afraid for the family’s reputation, arranged for Elwood to be committed to a psychiatric home but by accident, the psychiatrist, who, himself was a little suspect, accidentally committed Veta instead of Elwood.  The play then fell into chaos before Elwood’s compassion restored the entire family.  It would be impossible to find a better actor for the role than Joe E. Brown.  He was so benign and friendly that you could almost see his friend Harvey. Joe E. had an enormous mouth that was always smiling and it was such a feature that a Joe E. Brown cartoon ran in the English comic,  “Film Fun” for twenty years and as I was familiar with it, I wanted to see the play.

Joe Evans Brown was in vaudeville and other single and group acts as well as being good enough at baseball to be offered a contract to sign with the New York Yankees but he declined before he went into films. He started in films in 1928 but was not well known until he starred in the first all-color, all-sound musical film.  His career developed and one year he was the highest paid actor in Hollywood.  When WWII started, with his own money, Joe started visiting and entertaining the troops.   Typically, after the show he would go from tent to tent to meet the individual soldiers just to learn how they felt and how they were doing.  He always brought back tons of mail because he could deliver it quicker than the army mail.  He was doing this long before Bob Hope and USO did it and he visited the more  remote bases in Alaska and other countries.  He was awarded the Bronze Star for this work.

When Doris and I saw Harvey, the final curtain fell and the audience was on its feet to leave when the curtain parted slightly and two chairs were placed in the center of the stage. Brown came out and sat in one and some of us could actually see Harvey in the other.  He said, ‘’ I know a lot of you have busses and trains to catch so go but if you want to chat, I’ll stay awhile.”  We were near the front and like many others, we sat down again.  He answered questions from the audience, praised Londoners for surviving the bombing and kept our attention for about half an hour.  Now I have learned from Google that this is what he did with the soldiers, I realize he was doing it for himself, not us.  He died aged 82 in 1973, a true and dedicated entertainer.

One thought on “Character Number Eighteen”