Early in 1976, Doris and I started planning a trip to England as it was our 25th wedding anniversary year. We were now alone in our house with Doris’ mother comfortably settled in a St. Augustine nursing home and all the kids at colleges. We flew to Gatwick Airport and were met by Dick and Mary Carrington with whom we had arranged to stay for three days in their home in North London. Dick and I were in the army together, me being drafted from college and Dick transferring from his compulsory service in the coal mines to the army. We were together at Primary Training Camp at Tidworth on Salisbury Plain, at Battle Camp in Okehampton and all through officer training at Aldershot.

We were able to travel by subway easily from their house and we set out to visit where we used to live and went one night to the theater. We went to St. Mary’s Church near Putney Bridge where we were married but it was locked up. We crossed the bridge to the Duke’s Head pub on the Thames towpath road where we had lunch and a drink. This was where our wedding reception was in their upstairs party room and we went up to see it and spark our memories.

Further up the Thames towpath, we went to the Imperial College Boat house from where I coxed the college’s second eight in 1945 and 1946. We asked if Charles, the boatman was still there and heard he was nearby in another boathouse and found him.  I had great memories of him coaching me how to handle a racing eight in the tides of the Thames and how to stop the crew with a, “Hold-all’’ to stop the boat and then a, “Hands up for wash” when a tugboat went racing by. He said he had boat club members coming by to talk to him every day and said that he couldn’t remember any of our names but he knew what regattas we went to in every year in the Forties.

We ate out with our hosts all three nights but the best night was when they took us to an old-fashioned fish and chip shop.

I had pre-arranged to rent a car near where we were staying and after a lot of problems we eventually got one. In 1976, renting a car in the middle of London turned out to be much harder than I was used to in the States. We headed north up the, new to me, M-1 which got us to Wansford, a small village in Cambridgeshire, 90 miles away in slightly over an hour and I recalled it taking me over two hours in the Forties, driving through lots of towns and villages. Reservations in another country were not as easy to make in the Seventies as they are today and I had made a reservation for two nights at the Haycock Inn by telephone from Houston.

The Haycock was where, as a school boy, I 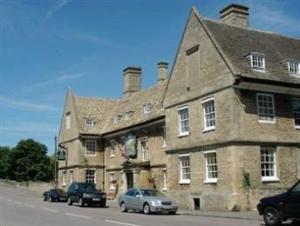 remembered all “the rich people” used to stay and one of my early wishes was to one day stay there. It was about four miles from the village of Ailsworth where I was born and we were given the choice of the only two bedrooms that had bathrooms and we chose the one that had a giant four poster bed. The receptionist said, “I knew you would pick that one,” and then told us it was where Princess Victoria slept on her way to London to be crowned Queen of England. We later discovered that the “bathroom” did not include a toilet and we had to go down a hallway to the only one on that floor. Dinner that night was perfect for me as I got steak and kidney pie and trifle desert, neither of which we had ever found in the States.

In the morning, we went to Peterborough to the office of a lawyer, Dr. Hunt, for whom I had caddied on the local golf course and had chauferred him to, and played with him on, golf courses all over England and Scotland and even on a golfing trip to Ireland. I had done this from the age of 14 until I went to college. Even then, on vacations and a few times later when I was married, Doris came with us on Christmas trips to Bournmouth. Dr. Hunt had died about 1972 and I had been informed that he had left me seven hundred pounds in his will and the reason for the visit to his office was to collect it. It was a nice contribution to our trip. 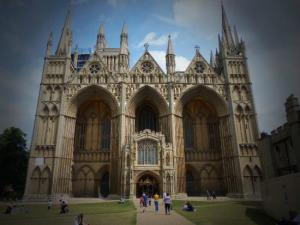 After a drive around Peterborough and a quick look at the cathedral, we went to the adjoining villages of Castor and Ailsworth five miles away. My house in Ailsworth was one of ten council houses and they had all been torn down. We drove around the village to see the changes but no one I knew lived there anymore.

Even the Wheatsheaf pub opposite my house had been closed so we went to check out Castor where I started school in 1935. In the day of my father and his nine siblings, living in Sutton almost three miles away, this was their school which they walked to daily. Nearly opposite the school was the Castor Church of St. Kyneburgha impressively located on a hill.

St Kyneburgha was one of the daughters of 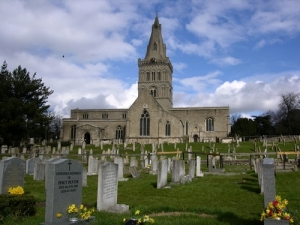 King Penda of Mercia and in 668 she founded a nunnery on the site of the Roman Praetorium that was originally there in the 4th century. The church now on that site has Roman, Saxon and Norman stonework and is in good condition.  I was christened in the font in the west end of the church and after early years of Sunday school when I got a bit older, I sat in my Granddad Tom Wadd’s personal pew with him on Sundays. He, his wife and my mother are all buried near the bottom of the hill in the graveyard.

To end our quick visit to my home villages we had a drink and lunch in the Fitzwilliam Arms pub. The wartime history of this pub includes a few fights between American airman from the Kingscliffe air base and survivors of the Airborne regiment who fought in Operation Market Garden at Arnhem. Many of them were later in the movie, “A Bridge Too Far.” 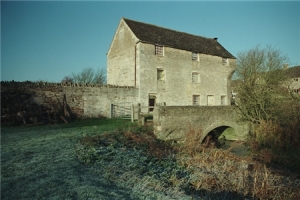 The next day, we drove to Kingscliffe about six miles west of Wansford, to see my cousin Joyce who was three years older than me. Her mother, Annie, my mother Jess and their brother, Wilf all lived with their father, Tom Wadd, my grandfather, in the old watermill in Kingscliffe in the Twenties and he operated the mill and ground the corn for the local farmers. The family moved from there about 1930-1935 but Annie and her three children remained in the village and Joyce was the only survivor in 1976. We had a cup of tea with her and then walked down to the mill to see the giant circular stones which were driven by a water-wheel to grind the corn. It was still operable but only as a demonstration.

From Kingscliffe, we drove to the Luffenham Heath golf club in the smallest county of England, Rutland where I caddied, and later played as a junior member. I played with Dr. Hunt, Lord Allerton and a doctor from the RAF station nearby in a regular foursome on Sundays. I still have an Otey Cressman wood shafted putter that Lord Allerton gave me. Doris and I had lunch there and then headed north 40 miles to Nottingham where my father’s brother Ernie lived. He and his wife had died but we had a short and pleasant visit with the son, George, his wife Rita and his sister Kathleen who I barely remembered from the annual gathering of kids at Christmas in Granny Glover’s house in Sutton.

We headed back east to the town of Louth where we had accepted an invitation to stay with Sheila Minnett and her minister husband in the vicar’s house. Sheila had worked during the war with Doris at the BBC in Bush House, London. We had a nice evening with them and had planned to visit other relatives the next day, but I was having sentimental problems with seeing family members and I had a change of plan which will be another memory for another day.