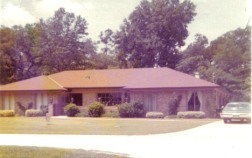 together with our moving van on the same day. Doris’ mother and the five of us drove down in the Impala wagon and stayed one night on the way.  For once we didn’t have pet problems as our cat did not survive the fire we had in Atlanta.

We started investigating schools for Melanie and Nick, both of whom were unhappy at losing all their Atlanta friends. Nick, in particular took it badly and immediately disliked the high school. We investigated the private Jacksonville Episcopal High School which was very close to our new home and was right on the St. Johns river.  We got Nick accepted to go there but they had a dress code and there was a problem with the length of his hair. I remember him having three hair-cuts in five days before he was fully approved.  Nick rebelled during this period and at one time threatened to leave home and hitch hike back to Atlanta. He relaxed 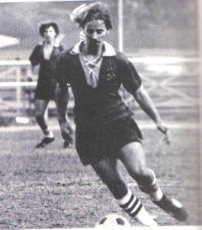 and felt much better when he found that he was one of the stars of the soccer team.  Later Nick came to love the school and all the life-long friends he made there. They 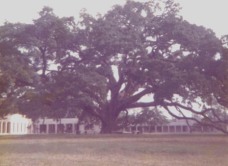 recently had a reunion to say goodbye to the wonderful 250 year old oak tree that dominated the campus open space and which has finally succumbed to old age. Episcopal had a wonderful record preparing students for, and getting them accepted, at the best colleges.

In the meantime, I set about learning an entirely new industry. Ivy Steel was one of three wire mills located in Jacksonville. Since there were no major steel mills in the South-east, the hot rolled steel rod which is used for wire manufacture, had to be imported and Jacksonville on the East coast was attractive to foreign steel companies and made them  competitive with northern mills. Steel was imported into Jacksonville from Germany, France, Britain, Belgium, Luxembourg and Japan. Hot rolled steel rod comes in a variety of sizes and as large bundled coils. These typically have a hard scale on the outside which has to be removed mechanically, or more typically, in an acid bath. The rod is then drawn or pulled through a series of dies down to the desired size.  After that, it may be galvanized with a coating of zinc or annealed in a high temperature oven to make it malleable.

In the case of Ivy Steel, the wire is then formed into large coils of wire mesh or welded wire fabric in specially designed electric welding machines. Some of the wire diameters employed for this are as large as  3/8 of an inch and used for airport runways,  heavy construction and by the concrete pipe manufacturing

industry. Standard wire mesh rolls used mostly for houses and driveways are made in the same way on smaller and lighter machines. Some wire companies also make fencing but Ivy did not. The largest industry served by Ivy was the many concrete pipe manufacturers throughout Florida which, at that time was having a building boom. I spent much of my time learning about the business and my best teacher was Bill Longshore, the Sales Manager, and I made calls with him on all of Ivy’s customers.

Outside the office, we started enjoying being so close to the Atlantic beaches, particularly Jacksonville Beach and Fernandino Beach which were only about eight miles away. I had once again been provided with a company Buick and I occasionally got to fly in the company twin engine plane until it unfortunately crashed, killing the company pilot. We joined the University Club which had a beautiful club and dining room on top of the tallest building in town, overlooking the downtown center across a large curve in the St. Johns River.

I, as soon as possible, surveyed the local golf clubs and wound up joining the Deerwood Golf Club which was centered in a classy housing development. Since we had a boat launch ramp in our community at Empire Point, it did not take long for us to buy a second-hand, 17 foot boat and trailer which fitted nicely in our back yard between our orange and grapefruit trees. We could launch locally but we liked to put in at the downtown city boat ramp between the Hilton hotel and the university Club and cruise the downtown area and the rows of boat repair docks on the way towards the sea. Doris and I both had our own crab cages and we often went crabbing with our evening cocktails in the back waters of the St. Johns. We usually came home with our crab dinner ready to steam.

Part of my job was keeping an eye on Ivy’s other wire mill, Meadow Steel which was in Tampa. I drove there frequently to work with the manager, Don Preston. Meadow had some wire drawing machines and their product was a range of wire support and positioning products used by builders to hold reinforcing bars or welded wire fabric in place while cement is being poured over them to make walls or foundations. Most of the machines for these products had been modified by Preston to make the sometimes quite intricately shaped items. He also served as the Sales Manager and knew every building company and builder in South Florida. Meadow was starting to get competition from plastic products but business was good and customers were loyal to Meadow. Ivy provided some sizes of wire to Meadow.

The manager of Ivy Steel was Jim Wellman and, as far as I could see, his only job was maintaining the inventory of the many rod sizes used by the relatively new Operations Manager, Julius Burns. He arrived at Ivy about the same time as I did but had quickly shown that he was very experienced and knew the business and the machinery. With Wellman buying the steel, Julius running the plant and Bill Longshore efficiently handling the customers, I started wondering why I was there. This is why I shared my time between sales calls with or for Bill Longshore and trying to find more about the Meadow business. It seemed to me that there was no sales force at Meadow other than Don Presto and I discovered that it was because they had very little competition, had a complete range of products and always delivered on time. It was in an ideal business niche that relied on South Florida’s building boom. If they tried to expand it would entail going into new territory and it could no longer operate the same way.

I saw no reason to try to grow but decided to look more into the cost and profit situation where I soon found that the principal sales cost was a fish camp that was used extensively for customer entertainment. I spent a week-end there catching big fat bass until I was tired of seeming to be catching the same fish over and over. The local fisherman I met there gave me the impression that there were more activities than fishing at the camp some week-ends. My probing questions resulted in few answers but the sales cost went down dramatically, as did my popularity as a visitor.

In my second year with Ivy, I began to learn more about the purchasing of foreign steel. I met the steel salesmen with Jim Wellman and I detected that there was an extremely close relationship with some of them. Any steel order we placed took a minimum of three months before the steel arrived at the Jacksonville dock, so ordering tended to be on the high side so as to avoid running out of certain rod sizes. In other words, inventory control was quite important in order to keep the tonnage of the order at an optimum level. Buying on the generous side avoided shortages but was an expensive way to go if the steel sat in the yard for a long time.

About the time I noticed this, there was a big and quite sudden decline in apartment, condo and hotel construction in South Florida and sales dropped almost immediately. With many tons of steel on order and ships heading towards the US, it became obvious we were about to have a financial crisis with contractual payments scheduled and a declining income. All the steel mills in Jacksonville were faced with this same problem and I had been discussing it with the other mill managers. About this same time, my boss, Pierce Marks had come to the same conclusion that I had in that my presence at Ivy Steel and Meadow Steel was no longer needed. Marks, who was always the money man, got involved with the inventory un-balance and by mutual consent, I resigned. How I found a way to stay in Jacksonville is another story for another day.