About July 1964, I was invited to join a new Company called American Cryogenics Inc. (ACI), a subsidiary of Standard Oil of New Jersey that was going to have a head office in Connecticut. I learned that a conglomeration of regional industrial gas companies and one air separation plant manufacturer was being combined in order to create a new large company capable of going after major contracts, particularly those connected with the booming space program that had been accelerated by President Kennedy’s September 12th, 1962 speech at Rice University in Houston.

Such a company would also be able to supply large volume demand for oxygen and nitrogen by the chemical and steel industries. Standard Oil had studied the industrial gas industry and decided that the growing demand could be satisfied with a company with production units capable of supplying large volume demands for liquefied gases, especially if some of those units also had supplemental contracts for high volume gases which could be supplied by pipeline. In this way, the gas pipeline would lower the unit cost for the principal liquid product and allow aggressive bidding for major contracts in the highly competitive industrial gas market. Standard Oil also had cryogenic gas liquefaction potential in their plans for the future.

I resigned from American Air Liquide and planned to join ACI when details could be provided. One month after my resignation I was told the Head Office would be in Atlanta, GA and not in Connecticut. This caused consternation for all members of my

family, but after doing quick research, we all discovered that moving to Atlanta might be of great benefit to us all.

I started commuting there, returning to Connecticut every second week end to help with the transfer and to sell our Rowayton house. I knew we needed qualified engineers and I was responsible for luring Al Domeshek, an engineer I had worked with in New York on many cryogenic proposals, to also relocate to Atlanta. He became Project Manager.

In looking for a house for he and his family, Al found an attractive house for me to bid on. This was a difficult time for us all but it was resolved by me contracting to buy the house Al had suggested. No-one but me had seen it but I had the closing on December 23, 1964 and left for the airport to go home for Christmas. We ran into a heavy snow storm and could not land at JFK Airport in New York until we had first flown around Newark for almost an hour. We finally landed at JFK where we were told our alternate airport had been Bermuda. I think we landed only because the pilot did not want to spend Christmas in Bermuda.

Doris and I with the three kids took two days to drive to Atlanta and moved into our new home about mid-January. We arrived in an un-seasonal snow storm. (I remember our kids throwing snowballs at the cars on I-85 below the Riviera Motel where we stayed until our luggage arrived.) Doris’ mother flew down to join us a few days after we moved in. I bought a 1964 Chevy Corvair for commuting to work.

We were arriving in the height of the aftermath of the Civil Rights Act being signed by Lyndon Baines Johnson on July 2, 1964. A local black school had just closed and we were in the middle of anti-segregation. In Atlanta, this was handled far better than most souther

n cities and neither we nor our children were ever seriously affected. While still in Connecticut we had been very concerned about this and coming to a State that was still arguing about its flag. When we arrived, the flag was the 1956 version which bore the Confederate stars and bars and which survived until 2001 whe

n they had a two year interim flag with only the Georgia seal. It was replaced by the current flag in 2003.

Everything in those early months in the office was chaotic and the current joke was, “If my boss calls, get his name”.  Eventually Pierce Marks, Jr., son of the founder of Marks Oxygen in Augusta, GA was chosen as Chairman and Walt Fleischer from Western Oxygen in Los Angeles came in as Sales Manager. I was appointed Manager of Bulk Sales reporting to Walt. Bulk sales meant large volumes of liquids or pipeline gas. All of the individual companies had local sales stores from which they supplied oxygen, acetylene and argon in cylinders, together with welding machines and all kinds of welding supplies to the construction market. This was in all cases a large percentage of their revenue and Fleischer brought in Bill Delaney as Manager of Store Sales. It was widely reported that the original major product for Marks was the exclusive contract to supply cylinder gases to the Heavy Water  Atomic Energy plant at Savannah  River and that many of those cylinders were sold multiple times with “full” cylinders going in the East gate and identical appearing “empties” going out the West gate.  Pierce Marks Jr. knew the store sales business very well but knew little about the tonnage market. Marks Oxygen had a 75 T/D oxygen plant and a similar one in Decatur AL supplying LOX and LIN to the Redstone Arsenal at Huntsville AL where Wernher von Braun’s almost intact crew from Peenemunde were re-located under President Truman’s “Operation Paperclip.”  ( Note. See my posts, “Working with the Germans” and “My Dad’s Doodlebug” under the “Other” category of this blog.)  Marks was also primarily responsible for another plant built by Independent Engineering, now part of ACI, and sold to supply pipeline oxygen to a Titanium Oxide plant in Savannah. Western had a nitrogen plant in Union City CA and Reno Oxygen had an oxygen pipeline to a large hospital in Nevada. All the plants in the system had a daily capacity of about 75 tons. Together, these companies, plants and stores had quite a competitive effect. However, it was soon proved that without very low cost product from much larger plants, it was still going to be difficult to succeed in bidding low enough to get the desirable contracts, most of which went to Linde, Air Products and the many plants of Big Three that I had previously helped to sell and start up in my prior years with L’Air Liquide.

I set out to learn the locations and procedures for bidding for the NASA business. Although at that time I was still a British citizen I had no difficulty in getting access to Cape Kennedy and the many NASA testing and component supply companies. I witnessed a lot of the construction for the Vertical Assembly Building, VAB, and Pad 39A at the Cape. The magnitude of the entire project was awe-inspiring. 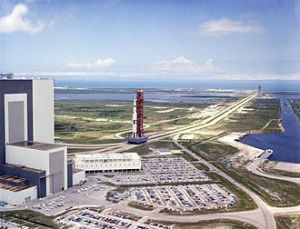 I was also travelling quite a bit to visit steel and chemical plants and refineries, trying to find a key contract to allow us to build a large plant and get into the big league. I studied a pipeline potential in California and a demand for large volumes of nitrogen at the Standard Oil facilities in South Texas. We were given the investment criteria of achieving a DCF, discounted cash flow, of 14% in order to get project approval. All of our studies were well below this and we started telling each other that DCF meant “Don’t Count on Fourteen”.

This was our business environment for some time but that is another story for another day.