There were not many changes to our life for the rest of 1951, but in 1952, Roger Sargent stopped working on his Ph.D. and went to work in Paris for L’Air Liquide, the giant industrial gas producer in Europe. At about the same time, an Australian student, Len Clare started working in my lab with the gas analysis equipment.

He eventually designed a very complicated set of glass storage and transfer bottles to catch and analyze multiple samples simultaneously. I would have had great difficulty with my project without this capability. I was pleased to learn later that he got a Ph.D. before he left Imperial College.

On February 2nd, 1952 King George VI died and his oldest daughter, Elizabeth was pronounced Queen. Her actual coronation was delayed until June 2nd, 1953 because of the mourning period for her father. The Queen Mother, Queen Mary also died, but her will stipulated that it should not interfere with the Coronation celebrations. Doris and I went to Westminster Abbey and filed past King George as he lay in state.

In the summer break of 1952, Doris and I, together with Alan and Pam Francia, went on a two week trip to France, Spain and Switzerland, using my car and the still existing roof rack that I had built for our 1950 trip to Rome and Naples. We crossed the English Channel from Dover to Bolougne and spent the first night at Pontoise in an inn we had discovered in 1950.

We then went down the Atlantic coast of France to Biarritz, located on the

coast in the Basque area of the Pyranees Mountains. We happened to be there when there was a Basque Festival. We saw lots of the local costumes and dancing. The beach at Biarritz is spectacular and has always been a holiday spot for the British. We were warned that bikinis were not welco 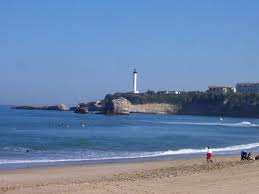 me on Spanish beaches, but unfortunately, Pam only had a bikini. Soon after we arrived on the beach, a Guard Civil came running towards us waving. We told Pam to get ready to be arrested. The policeman ran past Pam and grabbed Alan, who was wearing a tight mono-kini and ran him off the beach and made him cover himself with a towel.

We enjoyed our first meals in Spanish restaurants and did a lot of shopping. We then headed for Madrid where we planned to stay for three days. On arrival, a boy jumped on the hood of our car and asked, “You want rooms?” We told him we did and he said he would direct us to his sister’s pension, or boarding house. We let him lead us and immediately liked the place. They told us we could also eat there and our first dinner was a big dish of the Spanish dish paella. We have liked this ever since and Doris and I often make it when we have guests.

We went to the bullfights in Madrid, in their enormous bull-ring. We saw three matadors but they were not very 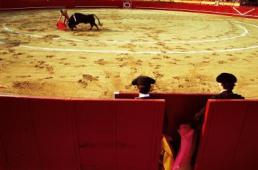 good, especially for me after seeing the Dominguin brothers and other top toreadors in La Linea and Algeciras when I was stationed in Gibraltar. We also went to the Prado, Spain’s national art museum which contains the art collection of the previous royal family.

Leaving Madrid, we went to Zaragossa and stayed in a hotel there. When Alan and I were getting our bags off the roof rack, two Australian girls chatted with us. Later, they showed up at our rooms, looking for us. I think they were disappointed when we both appeared with our wives.

After Zaragossa, we continued east, over what is really a desert to Barcelona on the Mediterranean and found it to be a large, fascinating town. We went up the mountain to Tibidabo with a business acquaintance of Alan in his Mercedes convertible. The views from the top were wonderful but the ride back down was the scariest I think I have ever been in a car. Alan’s friend appeared to go crazy with high speed turns and we thought we would not survive. It was a distinct relief to get out of that car and back into my hum-drum 10 horsepower Ford.

Not many miles from Barcelona, we found a great beach and village at Tosa-del-Mar. We loved it and we spent a lot of our time on this empty, perfect beach. (Years later, on another trip, Doris and I went back to Tosa and found it so crowded with English and German tourists. They even had a fish and chips restaurant for the English visitors.)

After Tosa, we were headed for France and Alan kept saying they had his name on the road signs, “A Francia.” We had literally got in sight of the French border, when suddenly, a back spring broke and we limped slowly to the border town of La Junquera, where we were forced to stay three days while the local garage could get a spring from Barcelona and put it on. Luckily, they had a small hotel and we had two upstairs rooms. The only problem was there was an army barracks across the street and they had a balcony filled with soldiers, all of whom were looking into our rooms. The soldiers loved it but our wives did not.

Eventually, we got moving again and went through the tiny Basque country of Andorra, from which we sent postcards to our friends, with Andorra stamps on them. Andorra is the highest of all capitals in Europe at 3,356 feet and has a population of about 50,000 and gets about 10 million tourists a year. We moved on and spent the next five days going slowly along the Mediterranean beaches all the way to Nice, where we turned north and came home through the French Alps, Switzerland and back into France, and on to Boulogne. Our ferry back to Dover had the worst weather we had experienced in crossing the Channel. Alan and Pam stayed with us for a day or two and then went home to Peterborough.

Our summer break ended and research was re-started in September. My professor, Dr. Haselden had patented an idea which incorporated a jet ejector into the process cycle of an air separation plant in order to operate at a lower pressure and save power.  He suggested to me that if I designed, built and installed an ejector into my process cycle, I would have enough work for a Ph.D. rather than a Masters. I willingly agreed without considering my financing would end in 1953. After consultation with the Head of Chem. Eng., Professor Newitt, Dr. Hazelden informed me that I could join the staff as an assistant-lecturer for a year, but I would not be expected to lecture. I accepted the offer and wondered how it would work out, but that’s another memory for another day.